For those of you who need it, here it is!  Part of the assignment is to play with the perspective,  especially since in Thursday's class we discovered how much Hopper altered it!  Also, cropping, strong shadows, making the sky more interesting, and simplifying, espcially the rocky shore, should be considered. 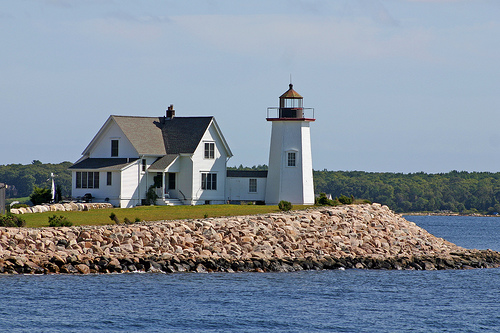 Guidelines for Your Painting following the Study of the Cassatt paintings

Remember, the resulting painting doesn’t need to look like a Cassatt painting!

A thumbnail sketch is highly recommended!

Below are three watercolors of Mary cassatt to study.  If anyone finds their size, how about telling us in your comments?  We'll discuss them in terms of value, color, control of detail, and the similarities and differences among the three.  An introduction to an online biography appears below the images with a link to the entire article and accompanying images of other paintings.  I hope you have time to read it!
If you can find one, bring a photo of yourself for a self-portrait excercise in class. 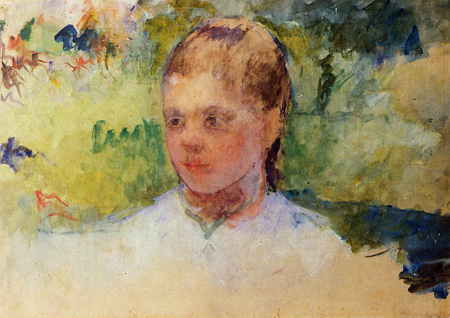 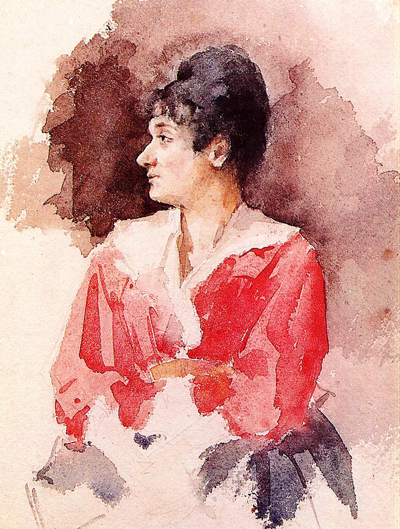 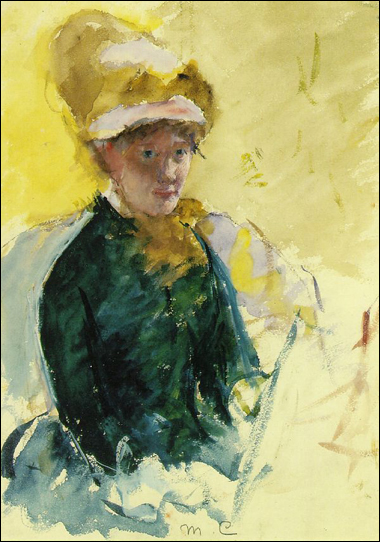 Self Portrait, 1880, size undetermined
Mary Stevenson Cassatt was an American painter and printmaker. She
lived much of her adult life in France, where she first befriended Edgar Degas and later exhibited among the Impressionists. Cassatt often created images of the social and private lives of women,with particular emphasis on the intimate bonds between mothers andchildren.
Cassatt was born in Allegheny City, Pennsylvania, which is now part of
Pittsburgh. She was born into comfortable circumstances: her father,
Robert Simpson Cassat (later Cassatt), was a successful stockbroker and
land speculator, and her mother, Katherine Kelso Johnston, came from a
banking family. The ancestral name had been Cossart. Cassatt was a
distant cousin of artist Robert Henri.
Cassatt grew up in an environment that viewed travel as integral to
education; she spent five years in Europe and visited many of the
capitals, including London, Paris, and Berlin. While abroad she learned
German and French and had her first lessons in drawing and music. Her
first exposure to French artists Ingres, Delacroix, Corot, and Courbet was likely at the Paris World's Fair of 1855. Also exhibited at the exhibition were Degas and Pissarro, both of whom would be her future colleagues and mentors.
Even though her family objected to her becoming a professional artist, Cassatt began studying painting at the Pennsylvania Academy of the Fine Arts
in Philadelphia, Pennsylvania, at the early age of fifteen. Part of
her parents' concern may have been Cassatt's exposure to feminist ideas
and the bohemian behavior of some of the male students. Although about
twenty per cent of the students were female, most viewed art as a
socially valuable skill; few of them were determined, as Cassatt was, to
make art their career. She continued her studies during the years of
the American Civil War. Among her fellow students was Thomas Eakins, later the controversial director of the Academy.
Impatient with the slow pace of instruction and the patronizing attitude
of the male students and teachers, she decided to study the old masters
on her own. She later said, "There was no teaching" at the Academy.
Female students could not use live models and the principal training
was primarily drawing from casts.
Cassatt decided to end her studies (at that time, no degree was
granted). After overcoming her father's objections she moved to Paris
in 1866, with her mother and family friends acting as chaperones. Since
women could not yet attend the Ecole des Beaux-Arts, she applied to study privately with masters from the school and was accepted to study with Jean-Leon Gerome, a highly regarded teacher known for his hyper-realistic technique and his depiction of exotic subjects. A few months later Gerome would also
accept Eakins as a student. Cassatt augmented her artistic training
with daily copying in the Louvre (she obtained the required permit,
which was necessary to control the "copyists", usually low-paid women,
who daily filled the museum to paint copies for sale). The museum also
served as a social meeting place for Frenchmen and American female
students, who like Cassatt, were not allowed to attend cafes where the
avant-garde socialized. In this manner, fellow artist and friend Elizabeth Jane Gardner met and married famed academic painter William-Adolphe Bouguereau.
Toward the end of 1866, she joined a painting class taught by Charles Chaplin, a noted genre artist. In 1868, Cassatt also studied with artist Thomas Couture,
whose subjects were mostly romantic and urban. On trips to the
countryside, the students drew from life, particularly the peasants
going about their daily activities. In 1868 one of her paintings, 'A
Mandoline Player', was accepted for the first time by the selection jury
for the Paris Salon. This work is in the Romantic style of Corot and
Couture, and is one of only two paintings from the first decade of her
career that can be documented today. The French art scene was in a
process of change, as radical artists such as Courbet and Manet tried to
break away from accepted Academic tradition and the Impressionists were
in their formative years. Cassatt's friend Eliza Haldeman wrote home
that artists "are leaving the Academy style and each seeking a new way,
consequently just now everything is Chaos". Cassatt, on the other hand,
would continue to work in the traditional manner, submitting works to
the Salon for over ten years, with increasing frustration.
To read the entire article and view other paintings, click here.